Opinion:The much-needed genesis of a global climate and energy benchmark

The World Benchmarking Alliance (WBA) is in the process of formulating a global climate and energy benchmark for corporations to achieve the UN’s Sustainable Development Goals.  The WBA recognizes that decarbonizing high-emitting sector sectors is key to decarbonizing the economy and meeting the Paris Agreement to limit global warming to well below two degrees.  The article explores the importance of global benchmarking and the role of corporates to drive change. The article also discusses some of the challenges of setting voluntary standards incentivizing businesses to meet the benchmarks.

The main focus of WBA is to translate the private sector’s contribution into meeting the SDGs. Multiple stakeholders need to play a part in order to deliver these goals however, the private sector needs to step up and make a significant contribution. Initially, the WBA started to look at the individual SDGs in efforts to align those with industry level goals. However, the alliance quickly realized that to deliver the scale of transformation they need to go one level deeper and look at systematical change. To make it more practical – the WBA has developed a framework where they define seven system transformations. They range from urbanization, digital inclusion, food and agriculture systems transformation, decarbonisation, energy transition, circularity and social transformation- because SDGs are a people driven agenda. So, labour, human rights and paying the minimum wage are also included in the benchmarking around which the financial system is seen as an enabler of transformation. The benchmarks set will be repeated in 12-18 months’ time to measure progress. In January 2020 at Davos the WBA will announce the launch of the 2000 ‘Keystone companies’ - those with the greatest impact on achieving the UN SDG’s to be benchmarked by 2023.

Influential corporates are identified by the WBA to be benchmarked

The WBA looks at which companies are crucial in driving the transformational change the world needs to see and will publicly benchmark them on their contribution. WBA has partnered with CDP, formerly known as the Carbon Disclosure Project developing a methodology with multi-stakeholders for what is needed for a specific industry to reach a true low-carbon economy. The first benchmark to be published at COP in Madrid is for the automotive industry. The automotive benchmark which includes around 25 keystone companies will be launched during COP25 in which one Indian company, Tata Motors is included. The WBA will come up with industry recommendations to rank the performance of the leaders and laggards to ensure greater corporate accountability. At Davos where the business world meets there will be an immediate call for these influencers to get involved in developing the methodology to figure out what the strategic objectives are. Among the 2000 companies that have been selected, around 8% of the companies are expected to be Indian. They are large companies who operate on a global level and are expected lead the way.

Existing standards are incorporated into the methodology used by the WBA

The WBA integrates existing climate and energy standards into the methodology to ensure best practice and efficiencies.  However, they also recognize that the standards that have been developed pre-date the SGDs. To be able to meet the SDGs the existing standards need to be complemented with additional indicators and measurement areas. These need to adapt to a changing environment. Once the methodology is in place WBA researchers use it to compare the companies’ performance using their data on a public domain. They then fact check the information with the benchmarked companies as part of the engagement process. This is done to drive more transparency.

The global consulting process on current benchmarks included a roundtable in Mumbai which resulted in mapping the current performances of SDGs in India. The country scored 58.1 out of 100, well below the regional average of 63.3. Figure 1 shows the country’s current score under each SDGs scored out of 100 (based on which the national score of 58.1 was derived). Based on this and additional inputs during the roundtables the WBA determines how corporate action can be aligned to improve these statistics. 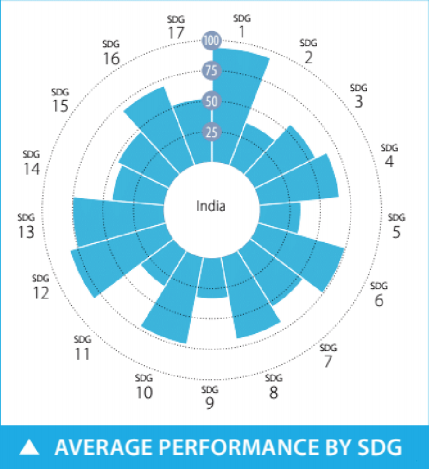 Compromise from all sides is inevitable in setting voluntary benchmarks

The alliance partners with over a 110 organizations made up of civil society, government and industry who play a key role in the consultation process. The methodologies are tested with partners of the alliance to ensure that the data used is relevant. The WBA needs to mobilize the alliance to make sure progress on the SDG's is made and fast.  The multi-stakeholder approach is unique and ensures alignment and real progress from the combined involvement of investors, business, government, civil society and you and me all as active owners of transformational change. This is the first time that the benchmarks are free and widely available to all to drive transparency and action. It is through this collective action that we can all get the world to where it needs to be and have the best chance of meeting the UN SDG’s.

Vicky Sins is responsible for leading the Climate and Energy Benchmark to support the decarbonisation of the economy and energy transition. Vicky has 14.5 years of experience working for ABN AMRO Bank and the last 7 years with ABN AMRO Clearing Bank in charge of Energy & Commodity clients.