On Sep 25, 2017 the central government launched the Pradhan Mantri Sahaj Bijli Har Ghar Yojana (or Saubhagya). The objective of the ‘Saubhagya’ scheme is to provide energy access to all by providing last mile connectivity and electricity connections to all the remaining 300 Lakhs un-electrified households (Refer Table 1) in rural as well as urban areas. In a nut-shell, it aims to achieve universal household electrification in the country. Under the Saubhagya scheme which is expected to cost about ₹16,320 crore (Refer Table 2) all poor households that have no access to electricity till date will be provided electricity connections free of cost.[1] 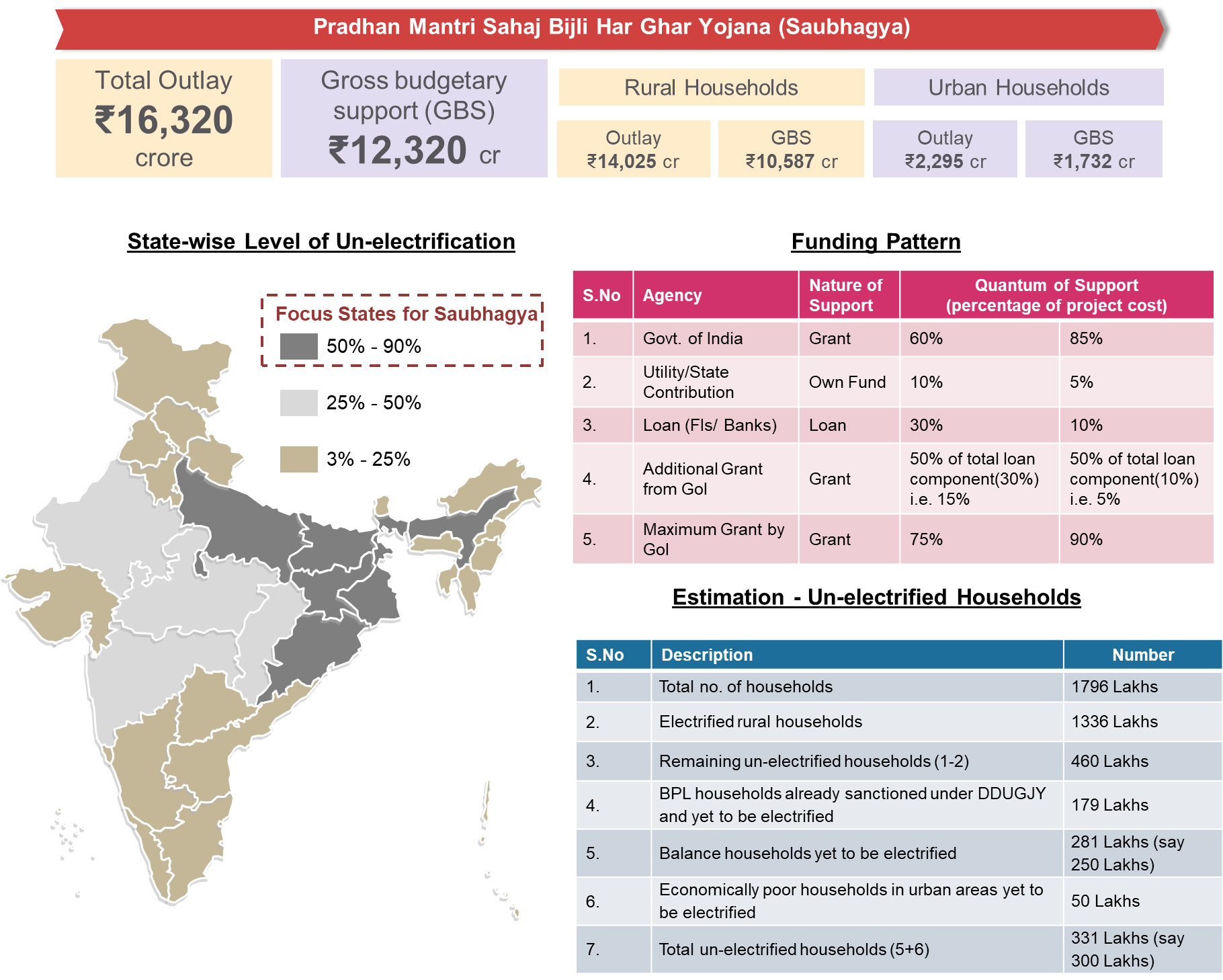 The Saubhagya scheme is meant to:

It is very clearly stated that there is no provision in the scheme to provide power for free to any category of consumers (even though connections may be provided for free). The cost of electricity consumption shall have to be paid by the respective consumers as per prevailing tariff of the Distribution Company (DISCOM)/Power Deptt.

The implementation of the scheme has been modelled on the Deendayal Upadhyaya Gram Jyoti Yojana (DDUGJY) scheme, with Rural Electrification Corporation Limited (REC) as the nodal agency. DDUGJY was launched by Government of India with the following components:

The modelling of appointing REC as nodal agency, DPR’s formations and approval process, mode of implementation and involvement of Gram Panchayat are some of the highlights in operation for DDUGJY that have been followed for Saubhagya scheme also.

All DISCOMs including private sector DISCOMs, State Power Departments and Rural Electric Cooperative Societies shall be eligible for financial assistance under the scheme. Following is the funding pattern for the scheme[2]

Saubhagya focuses on households and not villages

The Saubhagya scheme considers Electricity Access in terms of households and not villages.  This is a departure from the previous approaches. Previously, a village is declared to be electrified if 10 per cent of the households are given electricity along with public places such as schools, panchayat office, health and community centers. And although India has electrified 96 per cent of its villages yet there are approximately 300 lakh people without access to electricity.

Pace of the households to be electrified is aggressive 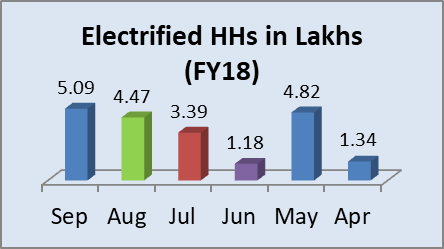 With a deadline of 31st March 2018 and 31st Dec 2018 for getting the additional grant, the massive scale-up in monthly electrification will be a successful one only if all the learnings from Rural Electrification done under erstwhile RGGVY and DDUGJY are put to maximum use.

About 90 % of the non-electrified households are in Bihar, Uttar Pradesh, Maharashtra, Madhya Pradesh, Odisha, Jharkhand, Rajasthan, Karnataka, J & K, and North-Eastern States which have been laggards in rural electrification till date and on which the success of the Saubhagya scheme now depends.

The next 12 months will reveal it all

The Saubhagya scheme has some positives such as provision for households outside the reach of grid lines and takes a different approach. However, the main challenge is going to be that the policy has set a standard for itself without enough focus on its capacity to deliver results. The scheme looks at electricity access beyond lighting and mobile recharging; and has bigger goals to promote livelihood enhancement through productive use. Significant results need to be shown, otherwise, Saubhagya will end up being just another political gimmick without clear benefits and possibly just messaging for an electoral purpose.

Table 1: Estimation of number of households to be electrified[3]

a. For rural households

b. For urban households

*All states/UTs are required to complete the works of household electrification by 31st Mar 2019. However, spillover works, if any will continue till 2021-22.

Table 3: States with most un-electrified households