Switching to Sustainable Transport: Learnings from the Namma Auto Project

The Namma Auto project funded by Switch Asia and European Commission aims to reduce emissions from the auto-rickshaw sector in two Indian cities – Bengaluru and Chennai. The intention is to phase out the highly polluting 2-stroke autos to relatively less polluting 4-stroke autos however the aim is to eventually phase in fully electric three wheelers to eliminate pollution from this segment, especially in urban areas. The following article provides a background as well as learnings from the aforementioned project.

Transport sector is identified as the key emission source – in the form of vehicle exhaust and on-road dust resuspension which accounts for 56% of PM2.5 and PM10 emissions, respectively. A good portion of that comes from private vehicles, especially two wheelers. The situation is not very different in other Indian metro cities. In Delhi, transport is the largest contributor of PM 2.5 and its contribution ranges from 17.9% to 39.2%.

Indian cities clearly need to decarbonize their transport sector and the change has to happen with urgency. Alternatively, some global cities like Singapore, Paris, Hongkong or Seoul have  changed consumer behavior to move to non- motorized transport and public transport modes viz. city buses, metros etc. whilst discouraging people to use personal vehicles. The shift is easier said than done. Public transport sector has to ensure that the mobility is faster, comfortable and affordable for its residents and in addition to being a reliable source of first and last mile connectivity. Across Indian cities, this gap in connectivity is being provided by auto-rickshaws.

In this context, the Namma Auto Project implemented by ACRA amongst other organizations looks to promote the concept of sustainable Auto-rickshaw system where there is a transition to either cleaner fuel/technologies or both whilst promoting last mile connectivity for facilitating public transport usage.

Namma Auto Project is based in the cities of Chennai and Bangalore. The aim of the project is to shift the auto rickshaws to cleaner fuel system in order to lower air pollution levels in urban areas.

Auto-rickshaws have been a landmark feature of Indian cities since their introduction in the late 1950s, becoming an indispensable aspect of urban mobility for millions of people. There are around 150,000 autos registered in Bangalore and around 85,000 in Chennai. By an estimate, auto rickshaws which run as Intermediate Public Transport (IPT) carry 10% of travelers every day in Bangalore and Chennai city. Research undertaken by TERI in Bengaluru in 2017 estimated that an average 4 stroke auto emits 3.7 tonnes of CO2 every year.

In 2018, Karnataka launched the Electric Vehicle Policy that not only pushed the adoption of electric vehicles, but also gave impetus to promote research and setting up of adequate infrastructure to support electric mobility. Tamil Nadu also launched its Electric Vehicle Policy in 2019. Both the states emphasized on replacement of existing auto-rickshaw fleet with electric versions. The TERI report suggests adoption of a phase- wise approach, to introduce penetration of electric vehicles in the Bengaluru city. This will allow sufficient time to all the stakeholders to plan and make the shift.

The figure below shows the six scenarios of phasing out 2-stroke and 4-stroke autos and its impact on emissions. 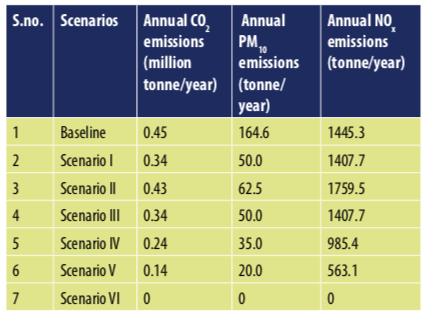 This project was undertaken by ACRA and is driven with support of organizations like ENVIU, WHAD and TERI, was to implement a switch to sustainable transportation.  This is brought about by two factors:

These factors were the two drivers of populated cities and towns meeting mobility requirements of an increasing population.

Switching to sustainable transport is a systemic change, where participation from all the relevant stakeholders is inevitable. Broadly, we can classify these stakeholders in to three segments:

Behavioral change is vital factor in transitioning to sustainable transport

Aside from cleaner fuels, there was a need for behavioral change amongst stakeholders to bring about proper transition into sustainable transport. For example, shared usage of auto-rickshaws can be promoted among user groups by facilitating the same through a service, either through a ride booking application. On supply side, the ecosystem needs to be ready to offer the service/product. Startups have taken a central role in the uptake of these ridesharing services. For policy makers, the actions need to be backed with rigorous academic research to suggest and communicate simultaneous policies that are both promotive and restrictive in nature. For example, banning of an older 2 stroke autos is a restrictive strategy whereas provision of subsidy to buy an electric auto is a promotive strategy.

The Namma Auto Project is designed to switch to sustainable auto-rickshaw system in identified cities (a pilot intervention was conducted in Bengaluru and Chennai). The project is funded by the European Union as a part of the Switch Asia Programme on Sustainable Consumption and Production, where the primary goal is to reduce GHG emissions.

The core objective of this project is to support auto-rickshaw drivers to switch to cleaner technologies and regulators to promote an ecosystem that facilitates this shift. As part of project intervention, a state-level cooperative society of drivers has been formed in Karnataka, dedicated to auto-drivers and their families. Over 7000 drivers have been trained under a common code of conduct. Almost all these drivers are under the ambit of financial inclusion today. A green financial instrument was created that covered 100% of the assert cost, and the lowest rate possible in the NBFC market.

More than 1500 drivers shifted to less polluting vehicles, including electric autos. Several research and policy papers and knowledge exchange were done, to create influencer / policy maker level sensitivity around the need for the switch. On demand side, a behavior change campaign aiming to reach 2 million population of Bengaluru, was launched, to promote public transport use and use of last mile -shared services through auto-rickshaws. A voluntary code on CSR for companies in the auto-rickshaw sector was also co-created through stakeholder consultations.

The project which worked across the spectrum of ecosystem of stakeholders was bound to face challenges during implementation. While the project consortium overcame these challenges, it also led to learnings which are not just applicable to similar projects but for any development /switch intervention.

During the implementation, it became quite evident that while every stakeholder is doing their bit there was a lack of coordinated efforts. There was a reluctance to collaborate which made it hard to achieve the desired task of integrated effort. Secondly, inclusion in this sector is dismal for technical and social reasons, and significant efforts are required to promote inclusivity in the sector.

The project also broke the myth around bankability of auto rickshaw driver community. The project facilitated over 1500 loans to drivers, whose repayments were also tracked, which had remained above 97% on an average since 2016. The need really was to customize the financial product for the communities whose earning and spending reference is a day and not monthly; and then take the offering to them. In the context of auto-drivers who belong to marginalized communities with disaggregated leaderships and political affiliations, a significant percentage of them are unable to even utilize the facilities offered under a policy incentive e.g. subsidies. For this community, to engage and make use of policy benefits, they also need nonpolitical organizational platforms representing themselves, and also require convenience and accessibility to such benefits, where possibility of exploitation by middle-men is overruled.

Finally, the single biggest learning from the project is that change is sustained only when the behavior changes. It can range from a user’s choice of consciously shifting to electric fuel based transport or from driver’s willingness to timely repay loans and improve their bankability. To get a sustained behavior change, the service offering has to first ensure the basic need of the stakeholder. E.g. Users will shift only when there are enough electric auto rickshaws available which are affordable, comfortable and reliable. Any intervention thus, has to plan for addressing the basic needs at the program design stage itself.

Manju Menon is the country manager at Fondazione ACRA, an Italian International NGO. For ACRA, she steers an EU funded project on Sustainable Transport, in India with a consortium of partners. She has co-founded NuSocia, a Strategic CSR design consulting organization in 2017 to channelize creativity and knowledge gained over the years.